Writing A Novel Is Hard Work!
We Just Made It Easier.
A Lot Easier. 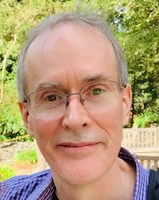 I’m Randy Ingermanson, known around the world as “the Snowflake Guy” in honor of my “Snowflake method” for designing and analyzing novels. I’ve written six award-winning novels. Before those, I wrote a few that never got published. Each story was tough to write. But the later novels were a LOT easier than the earlier ones.

Why? Because one day I realized it was simpler to design my storylines and create my characters BEFORE I wrote my novels. That way, I was able to spend more of my writing time being creative and less of my writing time worrying about whether it was all going to fit together into a cohesive design.

Years ago, I put my ideas together into an organizational tool I call the “Snowflake method”. That has become the most popular page on my web site and has been viewed over six million times. The Snowflake method is used by novelists all over the world.

A Challenge To Work Hard

The Snowflake method has ten steps that include a high-concept story idea, a Three-Act Structure, a detailed character analysis, a synopsis, a scene list, and more. That’s some serious thinking you need to do.

The good news is that I’ve written software to make it simple and fun to work through the first nine steps of the Snowflake method (everything but step 10, writing the actual first draft–you can already do that in any word processor). I’ve got more than thirty years of experience writing software. So I wrote a program, Snowflake Pro, to make the steps of working through the Snowflake method a joy — at least for me.

I added in four examples of Snowflake analyses of popular books and movies. (I’d like to thank my daughter Carolyn, who has a degree in English Literature, for helping me write these four example Snowflakes.) They’re all included in Snowflake Pro:

Many writers have a hard time explaining their story to agents or editors. The Snowflake method asks you to define a one-sentence summary and then expand that to a Three-Act Structure. That takes some thinking. It forces you to really understand your own story.

Several of the steps in the Snowflake method ask you to define your characters and then to get to know them — really well. This pays huge dividends in your fiction writing. The better you understand your characters, the more real they’ll seem to your readers.

Lining Up Your Scenes

A modern novel has dozens of scenes — often more than a hundred. Managing all those scenes is hard, because they cover hundreds of pages in your manuscript. A Scene List allows you to see all your scenes at a glance. Snowflake Pro makes it easy to create and edit your Scene List. You can import your scenes directly from your synopsis, edit scenes, move them around, add new scenes, delete scenes that aren’t working, and estimate the page count of your story. And a whole lot more.

Creating a Proposal — At The Press of a Button!

Many editors and agents insist on receiving a book proposal for your novel. There’s nothing complicated about a proposal. It spells out a suggested business partnership between you and a potential publisher, explaining the risks and rewards of publishing your novel.

The good news? Many of the pieces of a book proposal are actually steps in the Snowflake method.

So I added a bonus step in Snowflake Pro. This is not part of the Snowflake method; it’s just a little goodie that I threw in as an extra feature because I had all the information needed:

Snowflake Pro will also write in empty slots for things like your market analysis and marketing plan which are NOT part of the Snowflake method — along with some savvy suggestions on how to fill in these essential parts.

Just press that button and Snowflake Pro will save your proposal skeleton as an RTF file on your hard drive — ready for you to load into any word processor, where you can then fill in all the details. (RTF files are universal. All word processors can read them.)

If you’ve ever tried to write a book proposal, you know that the hardest part is just getting started. What should go in and what shouldn’t? How do you format it? How do you know if you’re doing it right?

Don’t be paralyzed by uncertainty. I love writing proposals. I’ve written many. One of my former editors teaches “how to write a proposal” at conferences all the time, using an old proposal that I sold to him years ago.

Use Snowflake Pro to get a running start on your proposal. And then use all the handy tips Snowflake Pro embeds in the proposal to guide you in polishing it to a high sheen.

When you buy Snowflake Pro, you buy a license to run it on up to five of your own personal machines. For example, if you have a laptop and a desktop computer and you own other computers that your spouse and kids use, you are licensed to install and run Snowflake Pro on all of them. Yes, really. That’s a very permissive license. In exchange for that, I ask that you not pirate Snowflake Pro. I try to do the right thing by you; thanks in advance for doing the right thing by me.

Will Snowflake Pro Run On Your Computer?

I wrote Snowflake Pro in a language called Java, which runs on ANY modern laptop or desktop computer running Mac or Windows. If your computer was new within the last ten years or so, you should be able to just download Snowflake Pro, install it, and run it. I’ve worked hard with my team of testers to make the whole process as simple and error-free as we can. See the System Requirements below.

(Java comes installed on most modern computers. If it’s not pre-installed on your machine, you can get Java FREE at the official Java web site here.) Here are the systems my team of testers have tested Snowflake Pro on:

Please note that tablets and phones are not laptops or desktop computers. Snowflake Pro does not run on an iPad, iPod, iPhone, Blackberry, or Android device.

Here’s What You Get in Snowflake Pro 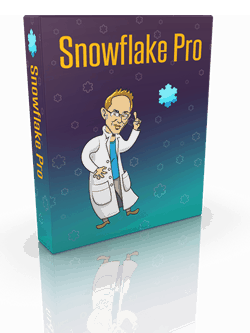 Here are some of the key things you get in Snowflake Pro:

How Much Does It Cost?

When I first created Snowflake Pro, I looked at various software tools for novelists in software review articles in Writer’s Digest. The trend was clear: The simple tools were free or very inexpensive. The complicated programs tended to be very pricey — hundreds of dollars.

Based on those thoughts, when I launched Snowflake Pro, I set the price at $100. That was and still is a fair price. I also have offered for a long time a 50% discount for those people who own a copy of my book How to Write a Novel Using the Snowflake Method.

But after running a store for ten years, things have changed for me. I’ve recently updated Snowflake Pro to run correctly on the latest version of Mac OS. I’ve added in an autosave feature. I’ve added the ability to drag scenes around. But the fact is that I don’t really like the administrative hassle of running my own store and dealing with constant requests for people who bought the software many years ago and now want another download because their hard drive crashed. It’s hard to automate those kind of requests. So that’s why I’ve made a fairly radical decision …

Snowflake Pro is Currently Free (With a Caveat)

As of December, 2019, Snowflake Pro is no longer for sale at any price. That means, I don’t have to run a store anymore and I can simplify my life.

Instead of selling Snowflake Pro, I’ve made it available as a free download if either of the following is true:

What’s the catch? There is no catch. You get a $100 product for free. I don’t have to deal with the admin stuff anymore. That’s a win-win, right?

But how will I make money? That’s easy. I have plenty of books I want to write and (possibly) some teaching tools I want to create. I need my time and energy back, so I can work on new stuff. Don’t worry, I’ll make plenty of money from those. Snowflake Pro has been very good for my customers and very good for me, but I just don’t want to run a software company anymore. I have other fish to fry.

Will I do any more updates on Snowflake Pro? Maybe. Or maybe not. I use it myself, so if I need it to work better, I’ll tweak it and issue an update. I may possibly sell the product to somebody who wants to run a software company. Or I might license it to them. If that happens, of course they’ll sell the product, and at that point, I’ll no longer give it away for free. But right now, Snowflake Pro is my toy, and I can give away if I want to.

Get Snowflake Pro In 30 Seconds

Snowflake Pro is available for immediate download. It should normally download in less than 30 seconds if you have a decent internet connection. Get it now!

Please remember that Snowflake Pro is ONLY available as a download, NOT as a CD. This is pretty standard these days, but I still occasionally get an email asking for a CD option. There isn’t one.

Please remember that if you have some glitch in downloading or installing Snowflake Pro, the problem is most often a problem with Java. Most of my customers don’t have any problems at all, but if you hit a snag, please make sure that the latest version of Java is installed on your system. It’s free and you can get it at the official Java web site. If that doesn’t solve your problem, send me an e-mail from my Contact page and I’ll do my best to get you squared away as fast as possible.

How To Get Snowflake Pro

If you already bought an earlier version of Snowflake Pro, then hop on over to my Download Again page.

If you already own my book How to Write a Novel Using the Snowflake Method, then you can also download Snowflake Pro for free on my Download Again page. You can get the paper version of my book for less than $12 and the e-book version costs $5.99. And there’s also an audiobook version available.

Why would I give you such an outrageously good deal? As I already explained above, I’m done with running a store and a software company. I’m moving on to other challenges, but the software still works fine, and lots of my fans want it. So have at it, and have fun!

Where to buy the book:

Here are some online places you can buy How to Write a Novel Using the Snowflake Method:

Get Your Free Copy Of Snowflake Pro