Sunday night at 10:31 California time, NASA will be running a high-stakes thriller, live from Mars, with billions of dollars at stake.

There’s no room for error. The one-ton Mars rover Curiosity is traveling right now toward Mars at 13,000 miles per hour. Within a seven minute window of time, it has to come to a clean stop, exactly on the surface of Mars, at a precisely determined spot inside the Gale Crater.

The ship doesn’t carry enough fuel to slow it down, so it’s going to fly through the thin Martian atmosphere, using a heat-shield as a giant brake. At 13,000 mph, a ship flies like a brick, but it does fly — if you steer it on a needle-sharp course.

If you go in too steep, the atmosphere doesn’t bleed off enough speed and you go splat on the ground.

If you go in too shallow, you bounce off the atmosphere and skitter off into space, with no way to turn around and try again.

You must fly at exactly the right angle, letting the atmosphere bleed off your speed, using your heat shield to keep you from frying to a crisp.

But that only slows you down to 1000 mph. Seven miles above the ground, you open your parachute. The atmosphere of Mars is less than one percent the density of earth’s atmosphere, so the parachute has to be huge. Even so, it can only slow you down to about 200 mph. Still way too fast to land.

Now you release your parachute and fire off your rocket engines. You don’t have much fuel here, but you have enough to slow you down to 2 mph.

Can you land safely at 2 mph? Yes, if you happen to be inches above the planet when you reach that speed. But there’s a catch.

Those pesky rocket engines are blasting out hot gases to slow you down. If you’re a few inches above the ground, those hot gases are going to blow up a massive cloud of dust that will mess with your rover’s instruments. You can’t safely get inches away from the ground with your rockets.

Here’s where it gets crazy. You use your rocket engines to hold you steady a couple of dozen feet off the ground while you lower your rover on a cable down to the surface.

As soon as the rover touches down, you cut the cable and zoom your landing ship away to crash land somewhere safely far from the rover.

It’s never been done before. NASA has spent over $2 billion on this project, and now we get to find out if it succeeds. If everything goes right, the rover will be sending back photos and scientific data for the next decade.

If the Curiosity mission fails, it’s going to be a long, long time before NASA gets the money to try again.

Here is a YouTube video, “7 Minutes of Terror,” showing how it’ll all play out:

And why spend all that money going to Mars?

It’s good science, for one thing. It’s great science, in fact. I’m a physicist, so don’t get me going on that or we’ll be here all day.

For another, the challenge of exploration always has unexpected benefits — from the 15th century exploration of the New World up to the Apollo missions to the moon that began in the 1960s.

More importantly, taking on difficult challenges gives mankind a vision. Yes, $2 billion is a lot of money. But the US government spends $2 billion every 4 hours and 52 minutes of every day. Vision is a precious commodity, and we need all we can get.

The rover Curiosity is a robot. Why send a robot? Why not send humans?

If a robotic mission fails, that’s bad but nobody dies.

With humans on board, everything changes. As Dave Akin noted many years ago, “Space is a completely unforgiving environment. If you screw up the engineering, somebody dies (and there’s no partial credit because most of the analysis was right … ).”

Someday, we should send humans to Mars. It costs more, because humans need to take life-support systems with them and they need to return home. Every life-critical system needs a backup and a fail-operational option. That adds weight, and every pound you send to Mars costs money. Every extra system costs money and adds complexity.

Why 2012? Because when you’re sending humans to Mars, one of the hardest tasks is finding people with the right psychological makeup. You’re sending people on a three year mission in which they might die, they might see their friends die, or they might have to make an agonizing decision using “the calculus of suffering.”

Not everybody’s head is screwed on right for that kind of a mission. If you send the wrong people, if you make just one mistake, you could kill everybody. 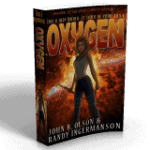 In our novel OXYGEN, things go horribly wrong and it’s up to the humans to make the hard choices about who gets to breathe. That is doubly hard when two of the four crew members are in love. Read more about OXYGEN on Amazon.

In the sequel THE FIFTH MAN, an unexpected hazard is waiting on Mars. NASA thought it sent a crew of four — but is it possible that a “fifth man” has come to Mars? How is that possible and what is his mission? Read more about THE FIFTH MAN on Amazon.

The virtue of sending humans to Mars is that humans are still much smarter than robots. If you have to make a split-second judgment call that weighs human values against each other or calls for imagination, then a human is still far better than a computer.

The virtue of sending a robot to Mars is that a robot doesn’t need oxygen, water, or toilet paper. Robotic brains are fast and never get tired. A robot is tough. Just don’t expect it to use imagination or make human value judgments.

Sunday night’s mission belongs to a robot named Curiosity. Good luck, Red Rover! May you arrive safely, make great discoveries, and pave the way for some of us to join you someday!